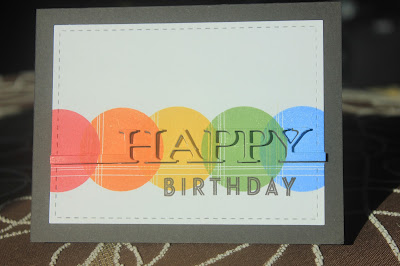 Well here I am again, struggling for inspiration for a "man card'"! I need a birthday card for my Dad, and I was drawing a blank so started looking through challenge blogs for an idea. Well, thank you Tracey McNeely for this little gem on the Muse Challenge blog. 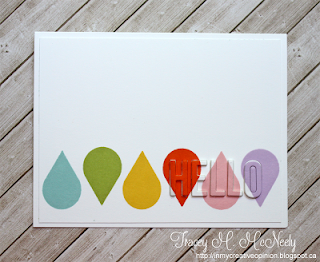 I thought a rainbow of color would the perfect fit for a birthday card, and love the look of the raised die cut sentiment. And this was pretty quick to throw together, so that was the icing on the cake! However, I am now debating whether it looked better before I reattached the raised sentiment?!Undecided. 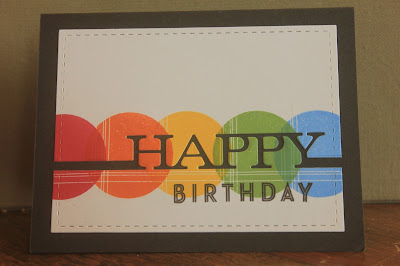 Thanks for stopping by,
T
Posted by Unknown at 18:42 5 comments: 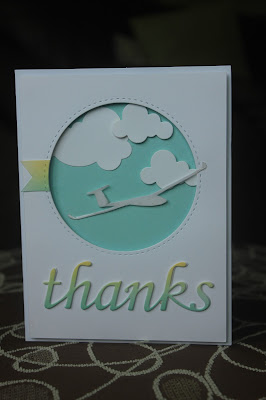 Yowza! It has been a long time since I have posted anything. I seem to be short on time for crafting lately, and have only made cards when I needed one for a family birthday, or something along those lines, and have not taken the time to take any pictures or blog any projects.

Well it is a very grey day here in Manitoba, so instead of flying, I am home working on a card. We are having a Pre+Canada Day pot luck tonight at my gliding club, and it is also a secret celebration for a club member, Glen, that has been with the WGC for 50 years! He is 85 and still flying. A truly amazing guy, and an inspiration to everyone that knows him.  I wanted to make him a thank you card for all the time he has put into volunteering at the club over the years as an instructor, treasurer, and chief grass cutter, etc. I always struggle to come with ideas for man-cards, so I started looking around on the internet for ideas and came across this thank you card on this week's Muse challenge: 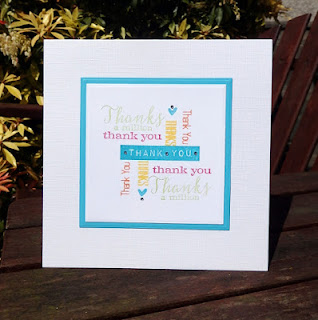 Pretty manly, right? I liked that it was square and bold, with a bit of a geometric style, so started playing around with this idea. Well, long story short, after many different versions of this card, I ended up with a round window on a rectangular card! It just worked better than the square did, so all my card really has in common with the Muse is that it is a thank you in blue and white!  No problem, I'm sure I will end up using the square pieces for another project. 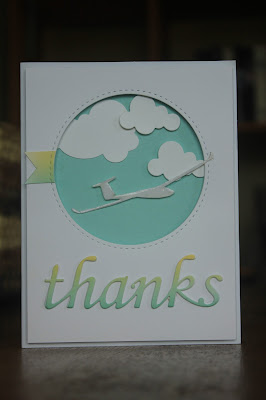 The funniest part is that I had this idea in the back of head to cut a glider out of white paper (since there is no such think as a stamp of a glider) but the reason I went to the internet to look for ideas is that I figured fussy cutting a glider was a bad idea that was going to take entirely too long, and would likely end up looking terrible in the end and landing in the trash can. I was just planning to do a blue sky window with some pretty cumulus clouds (the kind us glider pilots live for) and I had it all assembled, but ended up deciding it was missing something. I showed it to my stamping buddy, Sue, and asked her what it needed. She said, "A glider." Argh! So, I thought I would give it a try and see what I could come up with. 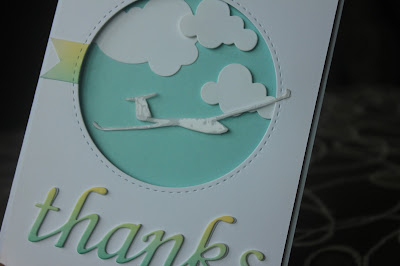 It took three tries to come up with something I was happy with, so was every bit as time consuming as I feared it would be. I even had to peel the clouds off and preposition them to make it work with the glider attached, but in the end I am happy with how it turned out, so it was worth the effort. I even dipped it in Versamark and embossed it with clear powder to make it shiny like a fibre glass glider. Not easy to see in the photo on this dreary day. Here's a different angle: 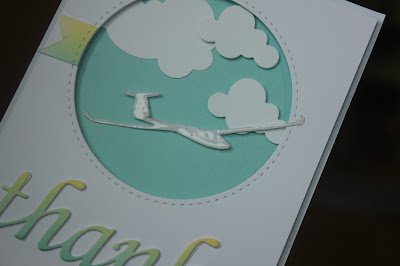 I think the guys will be pretty floored when they see it. They don't know about my "other" hobby!

Thanks for stopping by,
T
Posted by Unknown at 10:26 2 comments: 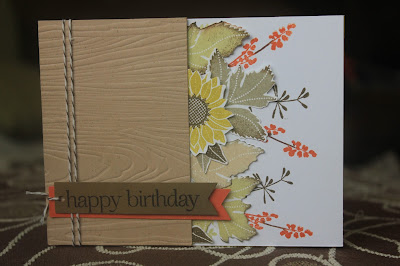 It's been basically forever since I posted anything! I generally get too busy during the summer, and stamping falls by the wayside unless I need to quickly make something for a birthday party or wedding. Well it seems that summer is winding down, and we are having a dreary day (and too windy for flying) so why not pull out some craft supplies and look for my mojo?

I was enamoured with the card Betsy made on this week's Make it Monday challenge at PTI, and wanted to give that idea a try. 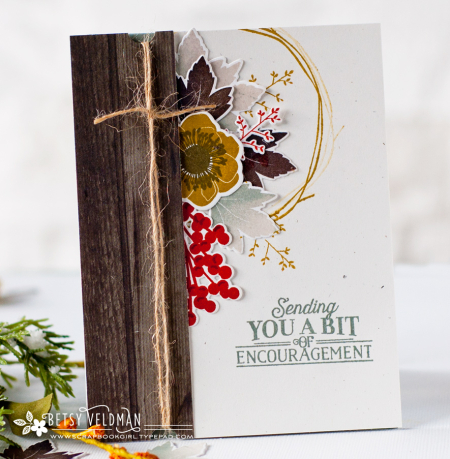 Wow, her photography is fantastic. Anyway, the challenge was to utilize floral sets in a way that is guy friendly. I always have a shortage of man cards in my stash, and this seemed like a lot more fun than my usual "go to" for guys, plaid. (Actually I did think about working some plaid in here!). 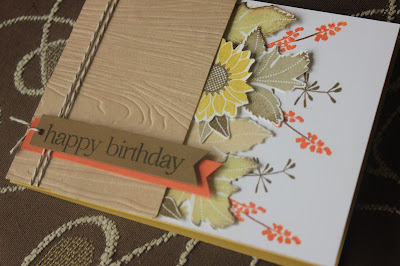 I used my Life, Meadow Greens, & Simple Sunflower sets for the foliage and flowers. I'm not sure how masculine this is? My husband did give it his approval, but he may be a bit biased! My line of thinking was that sunflowers = farming, and are not too fussy/fancy, so they make a good fit for a more masculine feel.

I found a scrap of kraft that was already embossed with a woodgrain texture, and it was just the right size to fit with the floral images, although it's a little too big and sort of defies the rule of thirds. Breaking it up a bit with twine and sentiment banners partially corrects the problem. I doubt most guys would recognize the rule of thirds had been broken anyway, right?

Thanks for stopping by,
T
Posted by Unknown at 10:41 3 comments: 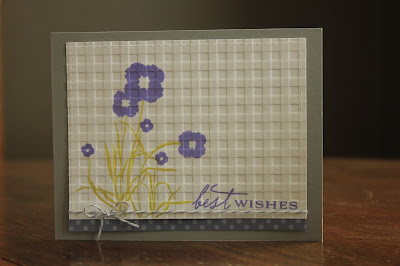 Hi there,
This is my last post for today. I wanted to participate in the last challenge for the week of anniversary festivities at PTI. I only had a wee bit of time before heading out the door with my honey for a Valentine's date day, so I had one shot to throw something together. The challenge is to use the letters of your name to see what elements to use in your project. Given my tight schedule, I probably shouldn't have used all 5 letters, but they all sounded appealing! I used bakers' twine for T, added a polka dot border for A, used an unused set for N (actually I have used this set before, but only the poppies, this was the first time I've ever used any other stamps out of this set!), I used a gingham folder to add a dry embossed texture for I, and lastly, I used a stitched rectangle die cut for S. I wasn't exactly blown away with the results, but I didn't have time to tweak it, and it's not too shabby, so I'm rolling with it.

We then headed off to the Canadian Museum of Human Rights, and then the Great Ice Show at the Forks, followed by dinner at one of our favourite Thai spots. It's been a hectic day! Time to turn in. 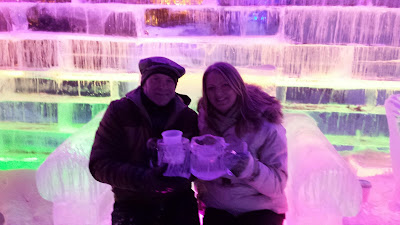 Drinks at the ice bar with my Love

Thanks for stopping by,
T
Posted by Unknown at 23:15 No comments: 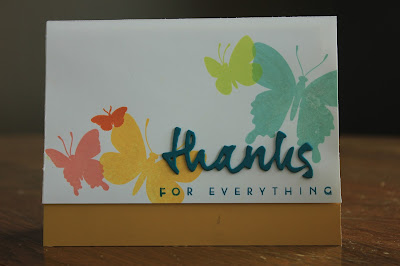 Hi there,
I'm doing a second post today for yesterday's challenge at PTI. It's a thank you to the warehouse staff that do a fantastic job of getting orders shipped out efficiently, especially each month a release time when they are super busy!
Thanks for stopping by,
T
Posted by Unknown at 22:40 No comments: 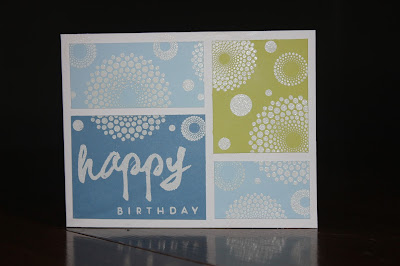 Hi there,
I think I'm getting more crafting done this week than I have the past year thanks to PTI's anniversary! The Day 8 challenge  is a color challenge using one of those folded paper thingies like you used to use in grade school to find out who you were going to marry/how many kids you would have/etc. Good times! I got limeade ice, blueberry sky and spring rain, so it seemed like I should make a guy-friendly birthday card. I never have enough of those in the shoe box. I was trying to squeeze in a few challenges today (last day!), so I thought I'd choose a color blocked layout with white embossing.for a quick card with some punch.
Thansk for stopping by,
T
Posted by Unknown at 22:28 No comments: 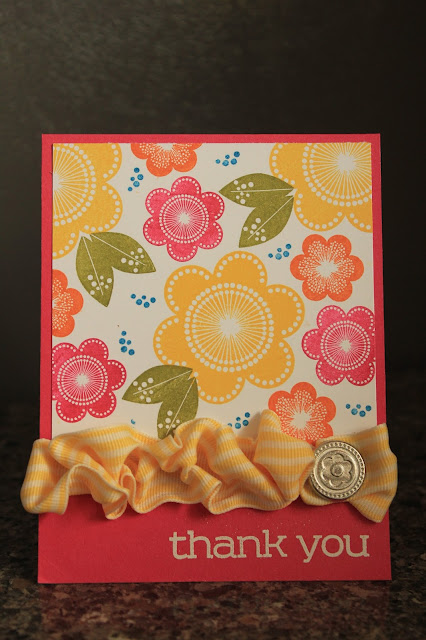 Hi there,
Day 3 of the PTI anniversary fun is a Grab & Craft challenge. The idea is to spend 5 minutes grabbing supplies from your craft room, and then using them all on a project.

It didn't even take me 5 minutes to grab stuff. I knew I wanted to use this striped grosgrain ribbon because I never use it, because it's generally too fat to fit on a card. I had just seen this ribbon scrumching technique last week at stamp club and was determined to try it out at home and use some of my unloved ribbon. I knew exactly the layout I would use, so it was as simple as picking some bright inks and cardstock to match the ribbon, and a stamp set to stamp a background. It's so easy to get striking results with this Friendly Flowers set, and I'm short on thank you cards, so Keep it Simple was an obvious choice for a sentiment since it would give me a variety of fonts to choose from. An ignored pack of brads that totally coordinate with these flowers was the last thing I grabbed. Hopefully I will remember to use those brads with this set again in the future. 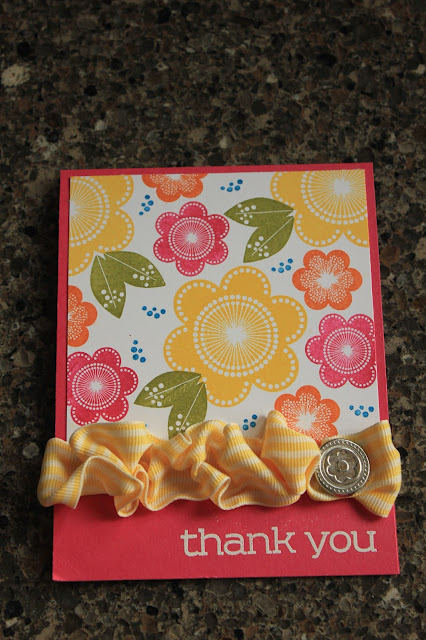 This project was pretty quick to assemble, too. I probably spent more time fiddling around with the ribbon and brad than I did on stamping. I should probably pull out some more stamps and colors and make a few more of these babies.

Thanks for stopping by,
T
Posted by Unknown at 21:38 No comments: