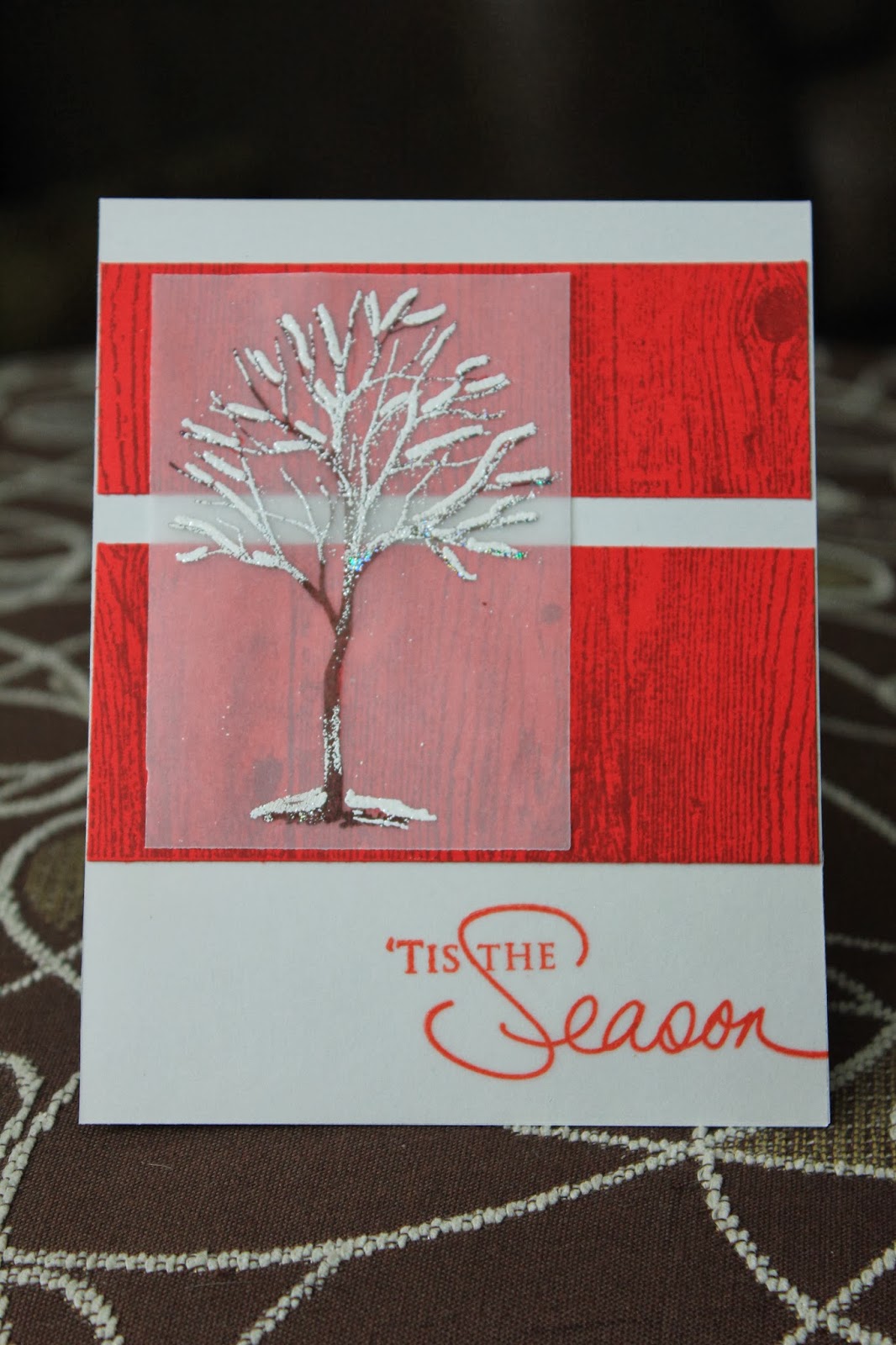 I know it seems like Christmas just ended, but Festive Friday is kicking off the year with another challenge. This is a great way to prep ahead of time, making seasonal cards throughout the year, rather than racing to make them during an already busy season. The challenges will be a bit different this year, with just a picture used as inspiration, leaving the interpretation open to whatever you choose to take from it. Lets take a look at the current challenge photo: 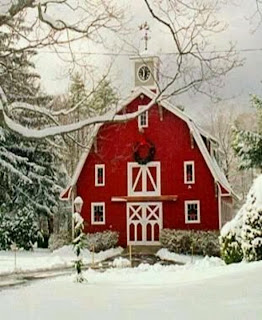 I love this photo. The first thing that grabbed my attention was the tree branch covered with snow and, of course, the pop of red from the barn against the muted background.
I'm not sure how I arrived at this design, but I really like the geometric look of it. I just started with stamping some components, and playing around with the placement to find some balance. I'm on a bit of a vellum kick this week! I'm using up my scraps. I stamped the tree in smokey shadow, then used a Versa marker to add some embossed snow to the branches. I stamped a woodgrain background with grey on red to pull in some red barn "feel". Initially, the red  was one bigger piece but it was too big. Turning it sideways and slicing it up made it a whole lot more interesting. I stamped the greeting on a vellum scrap because I wasn't 100% decided on the right placement, and I thought the red would be more true than if I had stamped it directly on the grey cardbase. 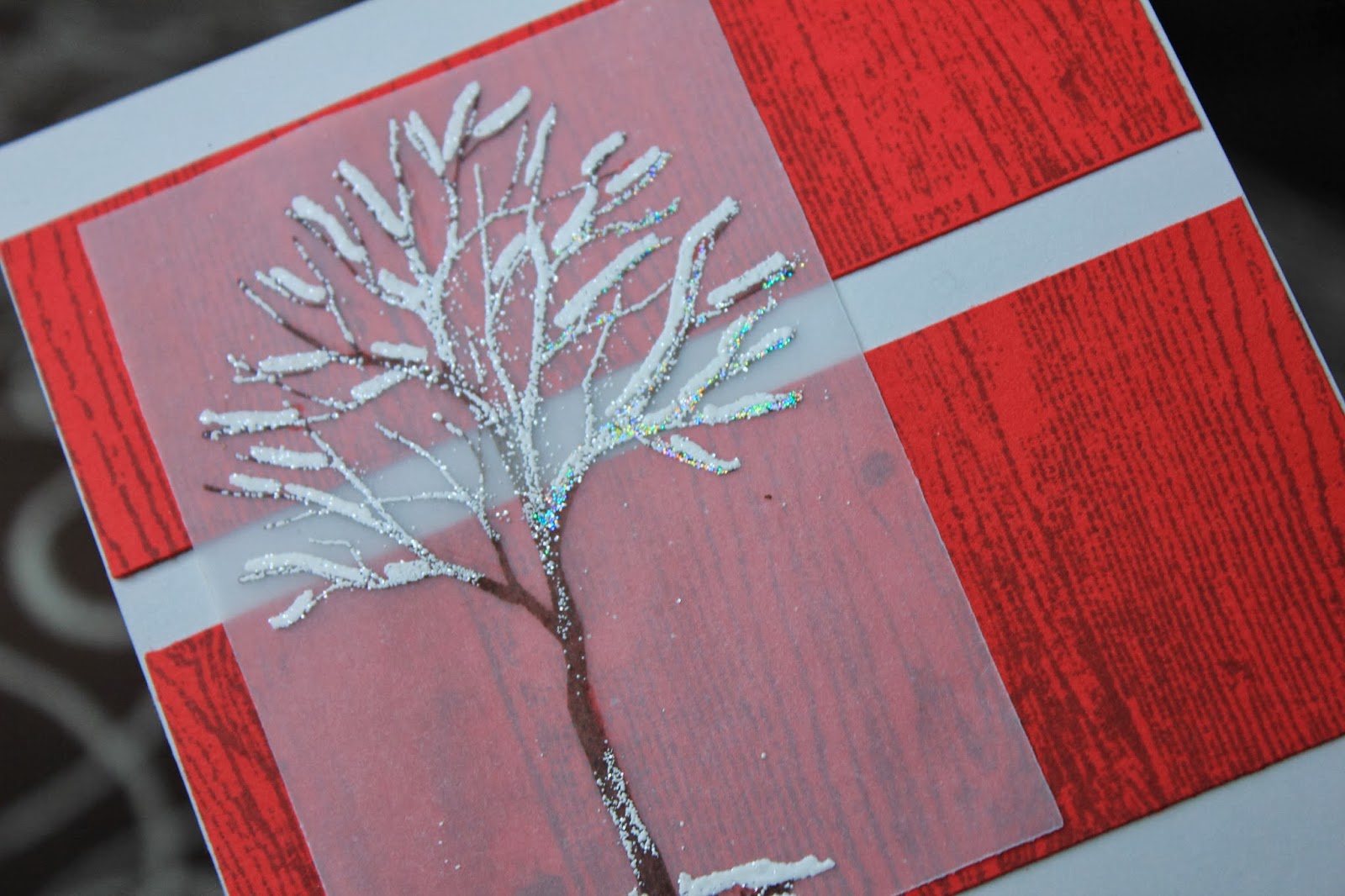 That's all for today.
Thanks for stopping by,
T 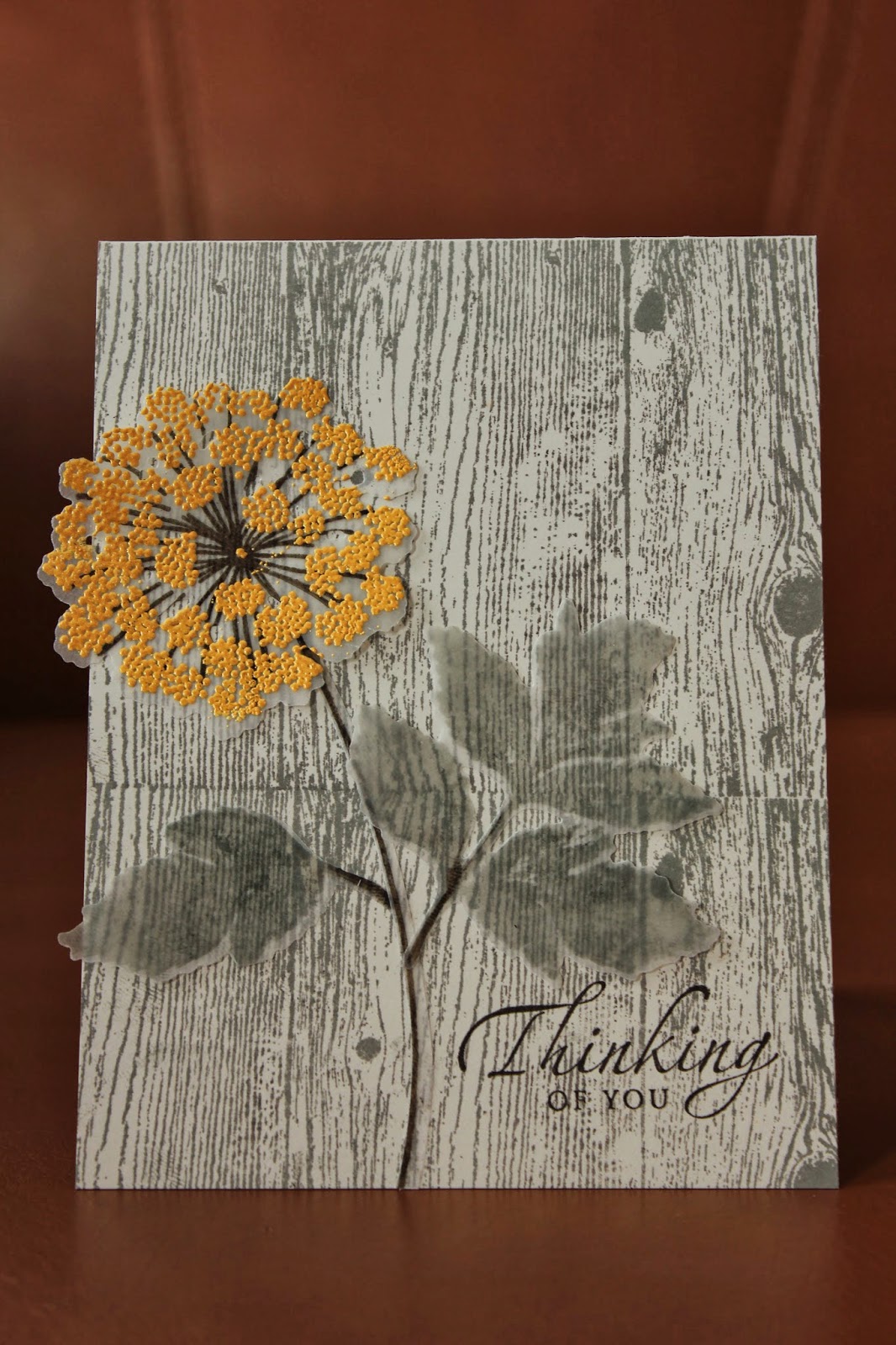 Hi there,
Hard to believe January is drawing to a close as I finally get around to stamping for the first time this year! After all of the chaos of the Christmas season, I wasn't feeling the least bit inspired to stamp. It's a wicked day here in Manitoba, with blizzard conditions, so it's a good day to stay inside and do a little crafting.  I decided to start with a really simple card for the current Fusion challenge. I decided to work with just the photo, using the rustic wood background, and the yellow and gray palette. 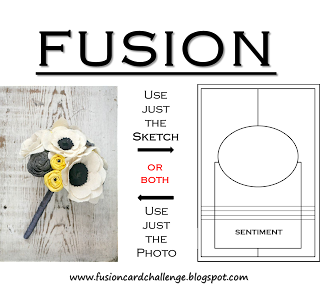 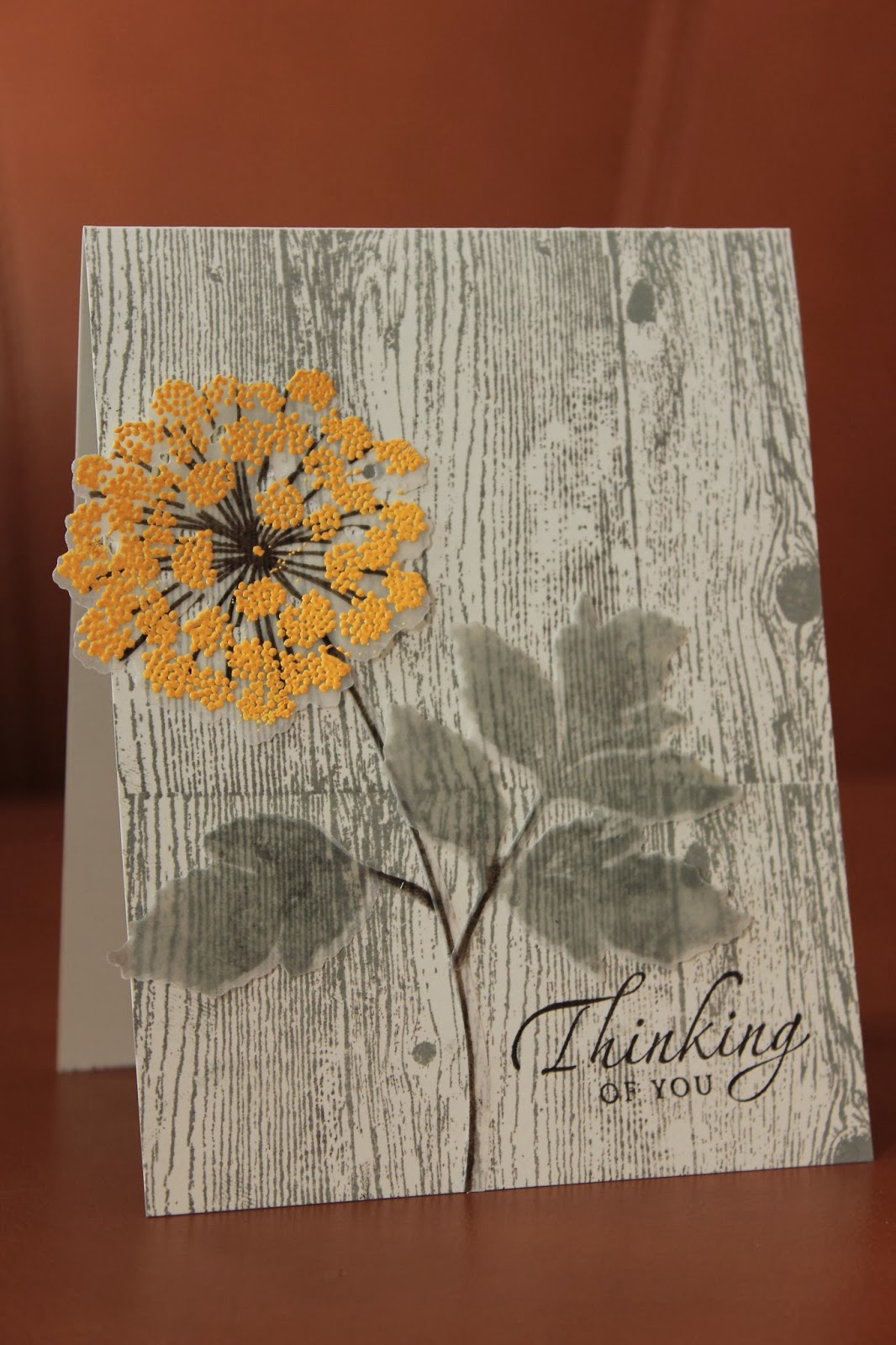 I started by stamping a woodgrain background on PTI soft stone cardstock with smoky slate ink from SU, then pulled out meadow greens, one of my fave sets from PTI. I die cut pieces from vellum, and stamped the foliage with a combination of smoky slate, and PTIs smokey shadow inks, and embossed the flowers with mustard Zing powder. A simple sentiment in smokey shadow finishes it off.

Time to chase my husband out of his cave and get working on setting up our new Pax wardrobes in our walk-in closet.

Thanks for stopping by,
T
Posted by Unknown at 12:25 7 comments:

Wow, it's been awhile since I last posted! I had planned to take a little break over Christmas, and also took an unplanned vacation away from the blowing snow, and am now amazed by how quickly 6 weeks have flown by. It just so happens that I started this blog exactly a year ago, so this seems like the perfect day to take stock of the past year, and plan for the year ahead.

Last year, my main goal was to take part in some on-line challenges as way of utilizing my stash (as in justifying the money spent!), especially the neglected items that were laying around, unloved, so that I would feel less guilty if I decided to part with some older stuff. All in all, I'd say that was a success. I did manage to use a number of previously unused items, at least one on each post, but have not yet parted with anything. (Well, I have passed along a few of my oldest sets to my niece who is 6 and "all about" stamping). Anyway, I have found an appreciation for certain items by finally taking them for a test drive, and have set aside others that I'm not that attached to, in plans for a "garage sale" to purge my stash, possibly later this year. Here is my "To Go" basket. 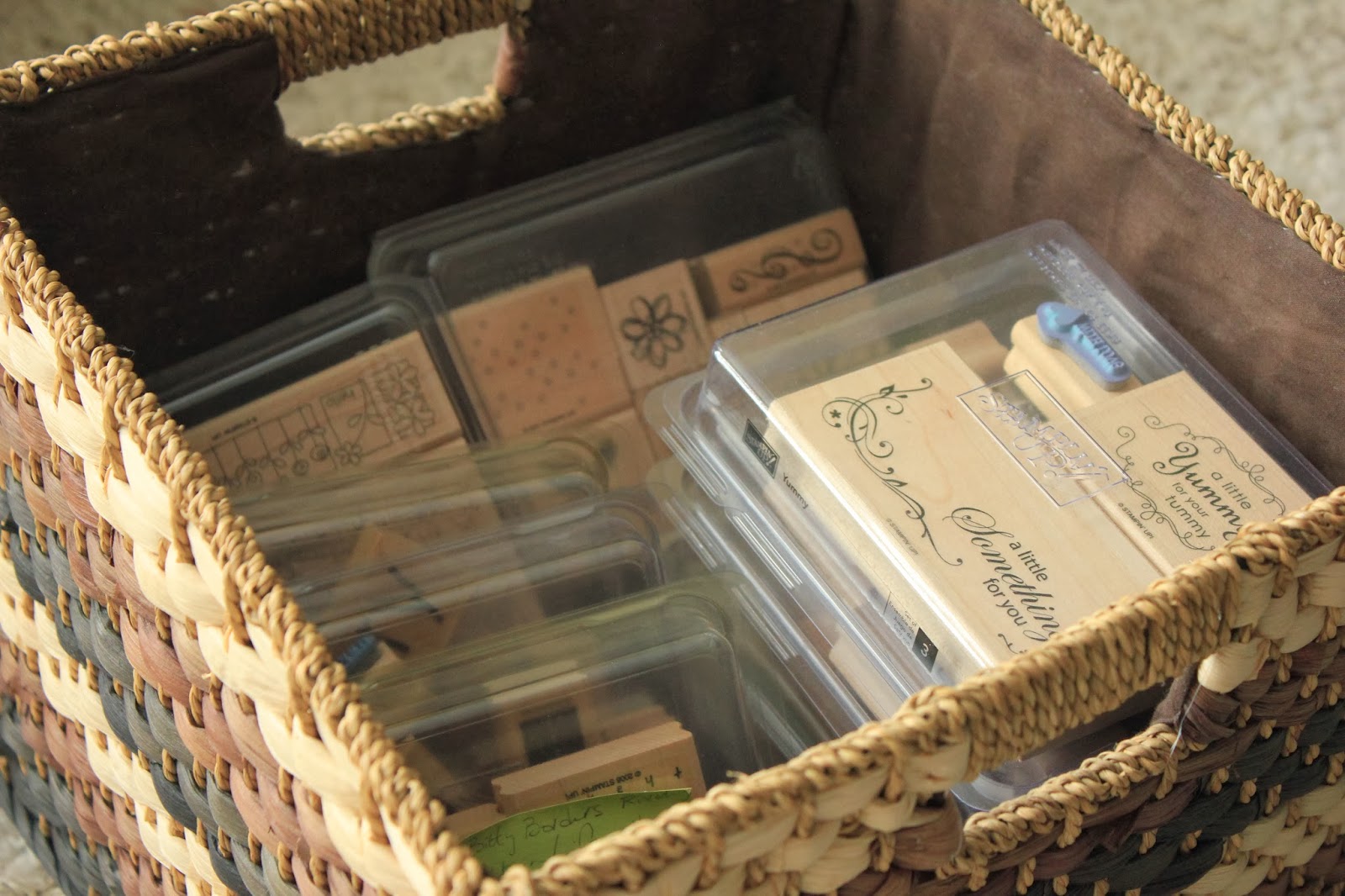 It's mostly older wood mounted SU sets which just take up too much storage space. Anything in this basket that doesn't get pulled out for use within the next 6 months will be banished from this house.

So what's in store for the blog this year? Mostly more of the same. I will do some challenges here and there, and try to use my new purchases before assigning them a designated space in the craft room. I dump anything new into this wicker basket to remind me to use it at least once before putting it away. 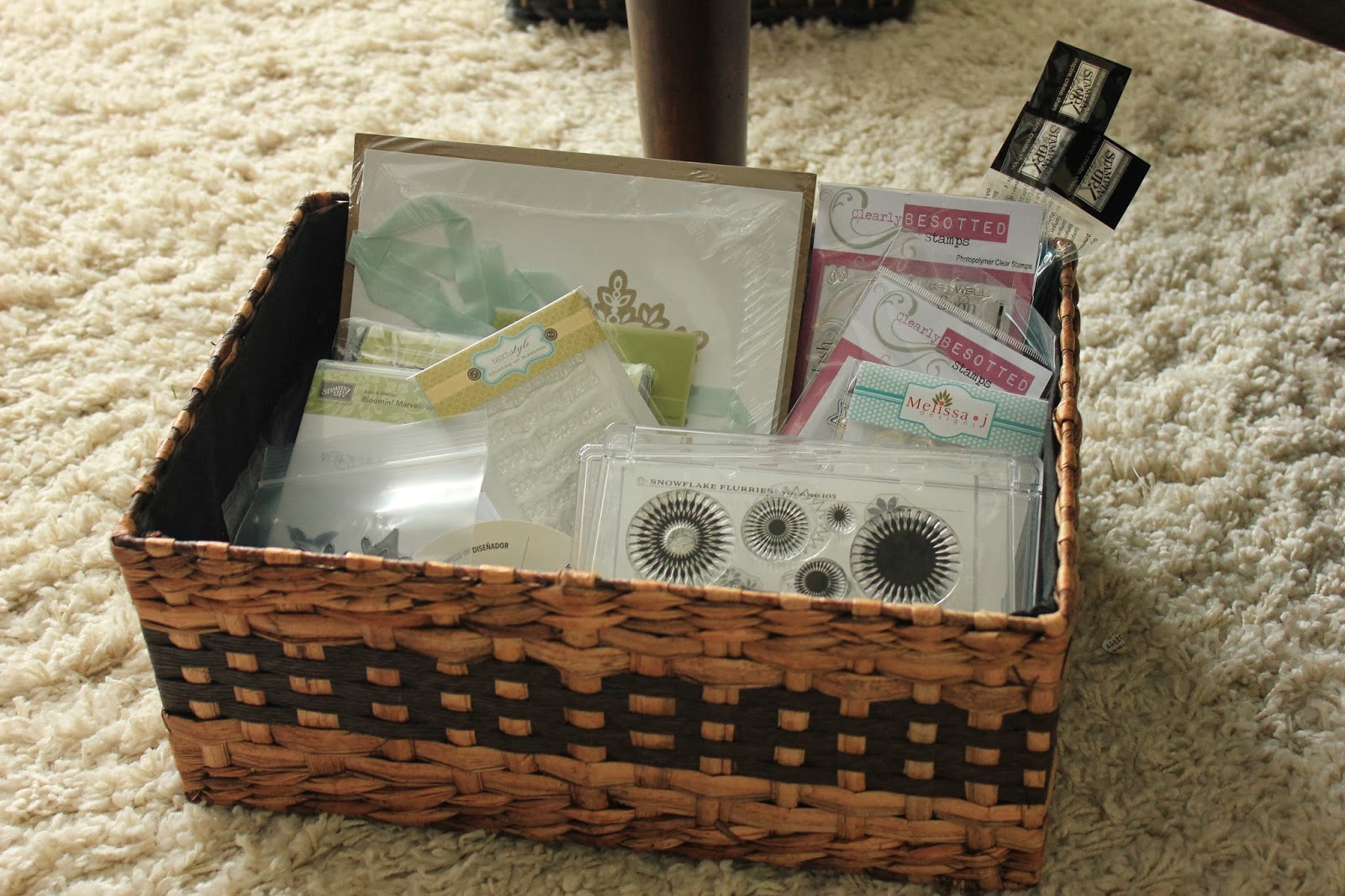 I also have a bunch of sets that have been tried out, but need to be transferred into cases and labelled before I can put them away. They've been piling up in this cardboard box, and will be organized very soon thanks to some help from this shiny new label maker my parents gave me for Christmas! 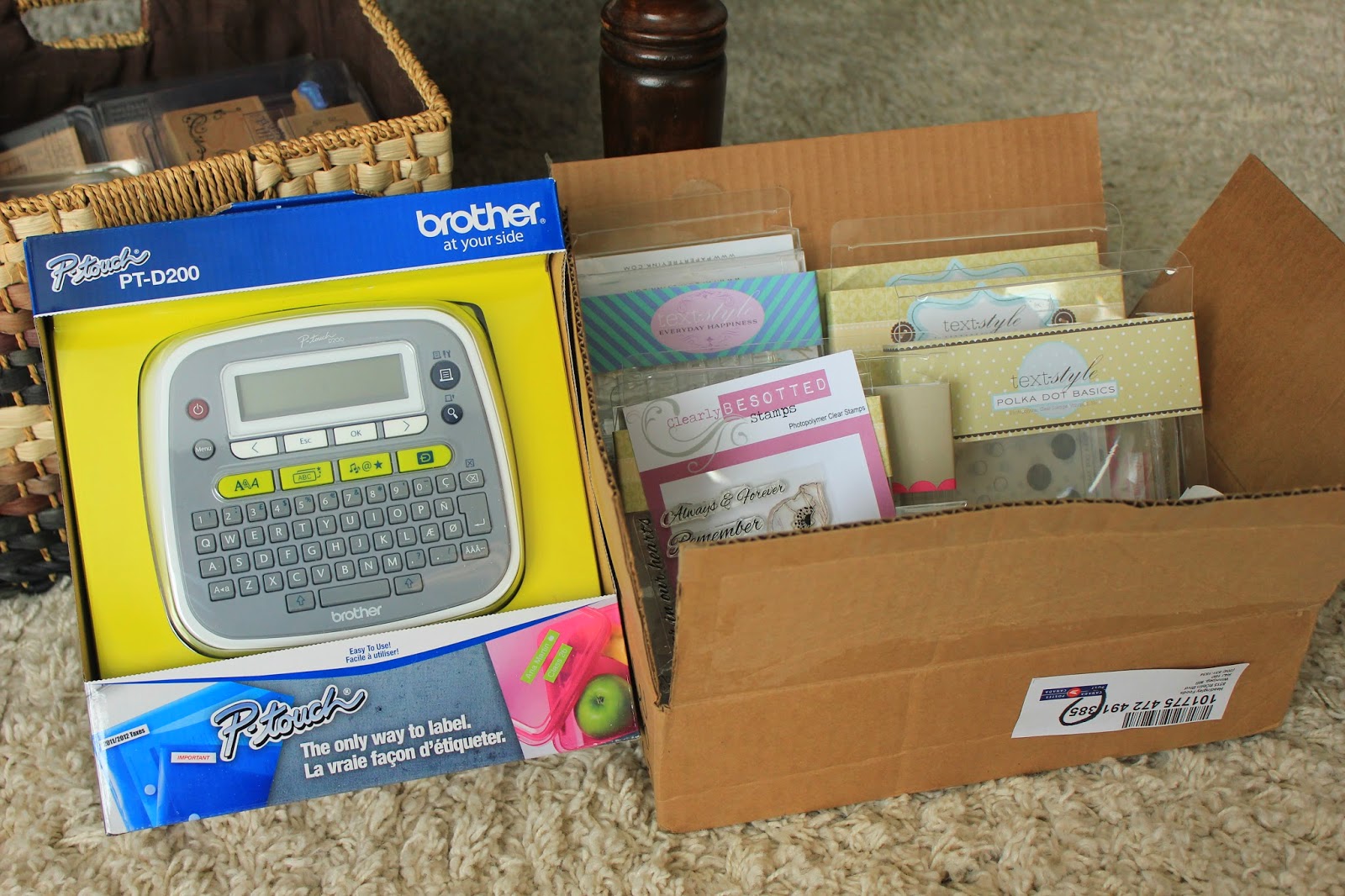 I wanted to get that project done, and clean up my desk before starting any new stamping projects, but I may have to squeeze in a challenge or two before that gets completed. Luckily I am the boss, so I make the rules, and can bend them, too!

I will likely be stamping a little less this year because we have a few home improvement projects getting underway. We are turning an extra bedroom into a walk-in closet, revamping the fireplace/built-ins feature wall in the living room, installing new windows and doors and  new siding outside, and relaying the sidewalks. There's a ton of work to be done, so I'll have to scale back on the crafting, focussing only on the challenges that really appeal to me, and skipping the ones that are truly a "challenge"! I think that's just as well. I find I tend to get better results on the challenges that really grab my attention, so I guess my mantra for this year will have to be, "Less is More"!

Must run, work to be done!
Thanks for stopping by,
T
Posted by Unknown at 14:04 No comments: